Mountains and Friends in Kyrgyzstan 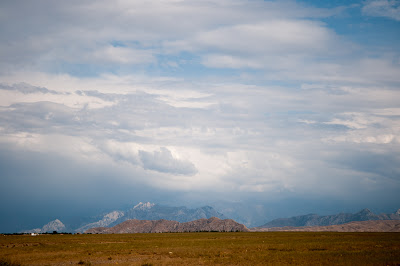 We were pointed by friendly locals in the direction of the border and eventually found a small group of Tajik soldiers who stopped us and asked us what we were up to. We explained that we were going to Kyrgyzstan and asked if this indeed was the road to Kyrgyzstan. They tried explaining something to us that we couldn’t understand, but it seemed quite clear that the road we were on indeed led to Kyrgyzstan (as the villagers had previously told us) but that there seemed to be some kind of problem with us going there. We could never figure out what that problem was, and eventually the commanding officer tired of trying to explain it and just waved us away, drive, go, go to Kyrgyzstan if you really want to. So we drove away.

Eventually, a suspicious number of vehicles on the road had Kyrgyz license plates and the people along the road did all suddenly look very different from the Tajiks. Rico got out of the car and walked up to a group of teenagers, pointing to the ground asking “Kyrgyzstan?”. They looked at each other, looked at Rico, and answered in the affirmative, “Kyrgyzstan!”.

Shit. Apparently the Kyrgyz had not felt it necessary to have any guards at this border crossing, so we had now entered their country illegally, by mistake. This was what the Tajik soldiers had tried to tell us: That they didn’t really have anything against letting us out of their country right there, but that we wouldn’t be able to get our paperwork inspected and stamped if crossing the border here. The locals themselves obviously prefer this border crossing, as it is hassle free, and had just pointed us in the direction of the closest and easiest crossing without knowing or realizing that it for us would be necessary to get all the paperwork done properly.

Backtracking. The little group of Tajik soldiers waved and smiled, lying in the shade at the side of the road, when we passed them again on the way back into Tajikistan. Eventually we found the fully staffed border crossing (not on the map) and got all the proper paperwork done for exiting Tajikistan and entering Kyrgyzstan legally. The full and proper procedure for entering Kyrgyzstan was really quick and easy, but considering that we had already been in their country once before earlier that same day it felt a little bit ridiculous that they bothered to double-check our passports here …

The drive from the border to Osh was essentially pretty uneventful, but made unnecessarily complicated by the existence of Uzbek enclaves within Kyrgyzstan. The main road to Osh goes through these enclaves, but we could not (for that would have required having multiple entry visas and doing the emigration and immigration procedures at the borders of each enclave). At the first enclave we encountered, the only possible route was to drive back again to the last town we had passed and there pay a taxi driver to drive ahead of us until we were on the correct road leading around the enclave. This road started out as a dirt track but eventually transformed into the first segment of a new trans-Kyrgyzstan highway of absolutely excellent quality. 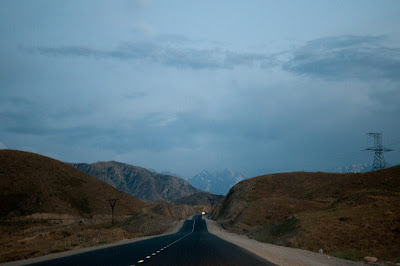 Our hopes of arriving in Osh at a reasonable time grew the longer we drove on this highway, but were eventually crushed at the police checkpoint before yet another enclave. To not enter the enclave, we were directed to a “road” that we could never have believed to be the correct one unless four different people had independently of each other insisted on it. It was a dirt track of Shakristan Pass quality, passing through some kind of wasteland along the Uzbekistan border, with almost no traffic and by this time in complete darkness.

When we finally reached the main road again it was late in the evening. We had a quick and simple dinner at a roadside eatery before continuing the laborious drive on a highway of doubtful quality. (Even though, compared to the dirt track, any highway at all was a blessing.) It was well past midnight when we finally reached Osh and checked in to one of these by now very familiar Soviet era hotels.

The next day, the set out to drive across the mountains all the way to Bishkek. Most of the road was of absolutely excellent quality, most of the drivers were both very skilled and also very helpful so traffic was flowing extraordinarily smoothly and we made very good speed northwards. 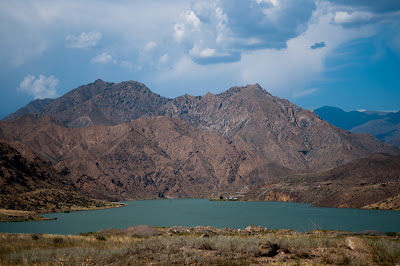 Kyrgyzstan is nowadays working hard on attracting foreign tourists. With these marvellous landscapes together with a lot of good roads and no unnecessarily complicated bureaucracy, they should be in a very good position to become a major tourist destination. The girls are remarkably pretty too. If you want a mountain vacation and are tired of Switzerland, or want to spend more money on getting there than on staying there, consider Kyrgyzstan next time. It’ll be worth it. 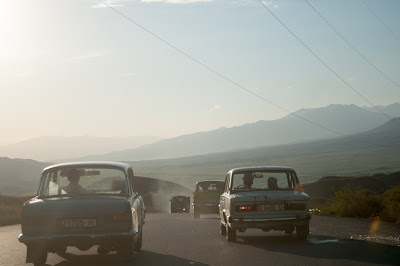 Despite the good roads, it was still a very long drive and once again well past midnight before we arrived in Bishkek. Here the hotel recommended by the Lonely Planet was fully booked, but the friendly receptionist called around and soon found us a place with free rooms, not very far away. 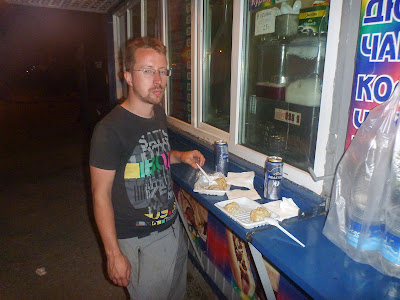 The next day it was time to meet some friends. Also in this city, just like in Baku and Tbilisi before, there were people here who knew Ihar and had received his mail about our journey, so we had Konstantin Zolotarev, Sabina Reingold and Tolkun Umaraliev awaiting our arrival. They had in their turn also told their friend Michael Ivashchenko about us and after we we had changed hotels to a better and more charming one of their suggestion, we took a long lunch at a nice café in the city center and then waited for Michael to come and pick us up. 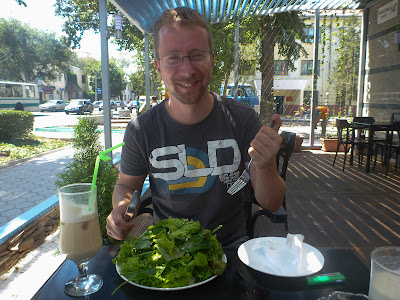 We first did some sightseeing in downtown Bishkek, got a short summary of the different revolutions and presidents since independence from the Soviet union, and then were joined by Konstantin. We proceeded to shopping electronics (Rico needed much more storage space for all photos) and souvenirs (Kyrgyz traditional kalpak hats are absolutely awesome) before meeting the rest of Ihar’s friends for dinner. 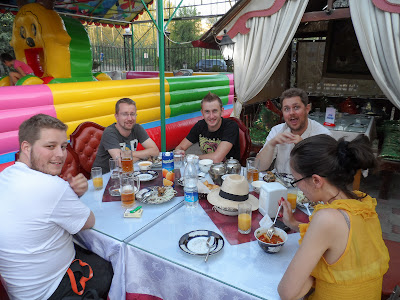 The dinner party in the garden of a fancy restaurant, with traditional food from the region, was absolutely great. The longer we sat and ate and drank, the more people joined us, and everyone was enjoying themselves immensely. Sabina is a journalist, and made an interview with me about our journey. One of the people to join later, Nuraika, turned out to have received the Best Personal Twitter Account Award and provided her fan following with live updates of our party from her mobile phone. We immediately renamed her Twitter Girl. (A week later, she would suddenly and unexpectedly be of great importance to us.)

After dinner, Konstantin asked whether we were in a hurry for else he would like to show us the mountains. We gladly accepted, and he drove us up increasingly bad roads, ending in horrible dirt tracks, up the mountains outside of the city. Bishkek is the only city within a great distance and the night in the mountains is very dark and the air is very clear. The starry night sky here was surreal in its intenseness and number of visible stars. I have before only seen such a night sky in very remote places, far from any cities, but here it was possible to see the lights of Bishkek in one direction but the vastness of space in the other direction. Magical. It was a number of days too late, but we still saw many shooting stars (and Rico took a thousand photos). 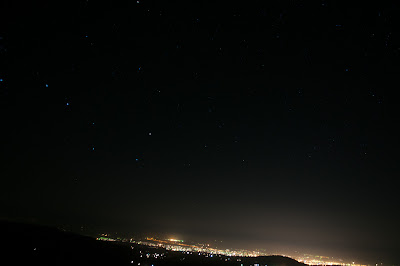 The major disadvantage of travelling like this is that we can never afford to stay longer anywhere, no matter how wonderful it would be, or else we would need many more months, or years, to ever reach Mongolia. So the next day, after promising our new friends to return to Kyrgyzstan, we drove on to cross the border into Kazakhstan.

Posted by Fredrik Roubert at 10:28