After our adventurous mountain crossing, we arrived in Dushanbe. Here we were met by Jonas Zachrisson (from Sweden), who works here as the Country Director for the Central Asia Region for Norwegian People’s Aid and their mine clearing efforts here. (If you have not done so already, this is an opportune moment for you to donate money to their work. <http://mongolia.to/donate> Mark your donation NPA to clearly show that you intend it for them.) Thomas had been introduced to Jonas by NPA people in Norway, and with Jonas’ wife not yet having returned from Europe with their children this weekend, he proceeded to take extraordinarily good care of us. 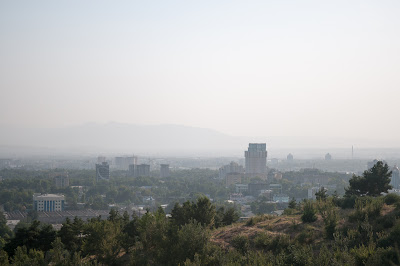 He complained for a while about how useless all hotels in Dushanbe were, ridiculously expensive but not offering very much value for money, and made a few phone calls to check whether there was some lodging option that he had not already thought of. But he quickly grew restless with the futility of this and decided to instead invite us to stay in his house, the childrens’ playroom was not used now when they were away and we brought up some mattresses from the basement and made guest beds between toys and cute decorations, and we were welcome to stay as long as it would take to get our ambulance fixed.

On the assumption that we had already had quite enough of the local grilled meat and bread, Jonas took us to a late lunch at a nice Lebanese restaurant and later on a sightseeing tour of Dushanbe, where we saw such sights as the world’s tallest flagpole (165 m, ordered built by the dictator to show the greatness of his country) and the new American embassy outside of town, isolated and fortified like a military base. 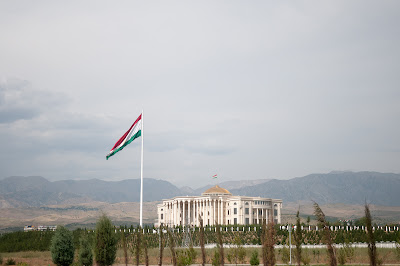 Jonas has an assistant called Abdul, who is born and raised in Dushanbe and knows everything and everyone. He was tasked with finding a suitable mechanic to take care of our ambulance, and in the late afternoon we got the message that the right man had been found and that we could drive it to him the day after.

With such excellent lodging and the promise of a competent mechanic, we were in good spirits when we followed Jonas to a popular expats’ watering hole to have some drinks and talk for a few hours. Jonas turned out to have led quite an adventurous life, including many years in different places in Africa (he met his English wife when they both were working in Ethiopia) and had a wealth of stories to tell. I’m, for example, now inspired to visit Namibia, a country that I hadn’t before ever thought much about. 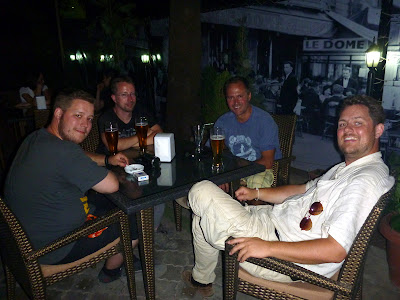 The next morning, I drove the ambulance following Abdul to a small workshop outside of town, in the Rudaki district. There a man named Rustan worked, and he was said to have twenty years of experience repairing automatic transmissions. He was almost offended when I insisted on showing him what was wrong, for he had immediately understood what had happened and what needed to be done. 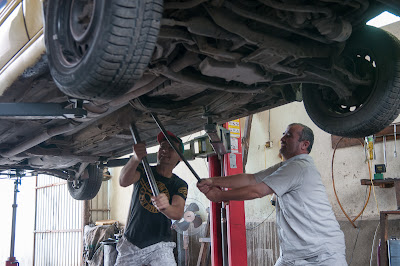 With the help of his two sons (his apprentices), he lifted up the car in the workshop and with the oldest son using the small and the huge sledgehammer bent everything, that had been damaged under the car, into shape again so that he could dismantle the transmission. The fluid that had leaked out upon impact (which had the colour of motor oil, but not really the right thickness for actually being motor oil) had been automatic transmission fluid. It just has a very different colour when it comes out than what it has when it goes in, which now became obvious when Rustan emptied all the old fluid from the transmission system. Then Abdul drove me to the mechanics’ bazaar to buy some litres of new automatic transmission fluid, and Abdul (of course) knowing exactly where to go, we found authentic Toyota automatic transmission fluid, imported from Japan, while Rico stayed in the workshop in case there were any questions to be answered and to take some photos.

With the transmission repaired and various loose parts (radiator, etc.) screwed firmly into place again, Rustan proudly encouraged me to take a test drive. The car started flawlessly, there was no noise that shouldn’t be there, the gear selector worked perfectly again, and it was a triumphant test drive. 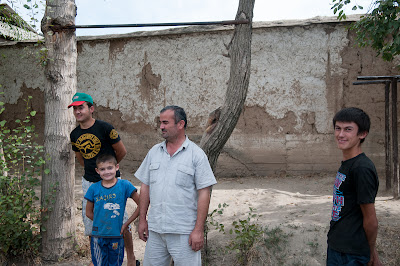 It was now early Sunday afternoon, so we decided to use Jonas’ hospitality to stay the night in Dushanbe (using the afternoon for doing laundry, relaxing, uploading photos on the internet, etc.) and then drive on again in the morning. Jonas took us for dinner at an excellent Chinese restaurant, well hidden in one of the big business hotels in town, which’s existence shouldn’t be surprising considering the considerable amount of Chinese working in Tajikistan, building roads, tunnels, houses, and whatnot. (There were even a few road signs printed only in Tajik and Chinese, without any Russian or English.) 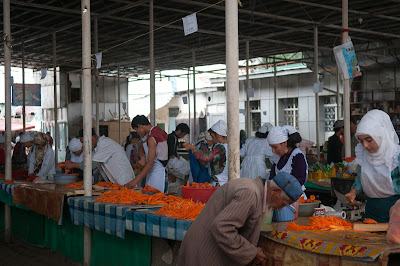 Rico had spent some time researching the status of the border crossing at Karamyk, which we had hoped would be open or maybe be opened while we waited in Dushanbe, and which the border guards on the way in had emphatically claimed to be open (even if we didn’t believe them too much, considering all the other things they also claimed). In the end, however, it stood clear that it wouldn’t be possible for us to cross the border at Karamyk in the foreseeable future. (To hope that it would be opened was not foolish, though, for when I write this we have learned that the border there indeed has now been opened again.)

This meant that the only possible way out of Kyrgyzstan for us now would be to return through The Tunnel of Death and across the Shakristan Pass again, to then turn eastwards at Khujand and drive into Kyrgyzstan through the border crossing at Isfara. 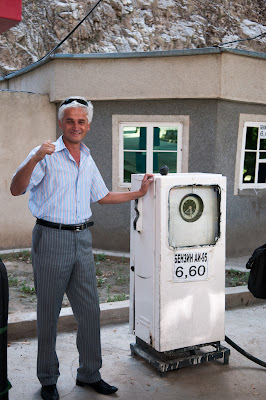 So we set off in the morning, stopping to refuel before the mountains at a small petrol station run by a man named Iskandar who was bemused by us admiring his original 1969 vintage petrol pump, still working flawlessly, and proudly showing the new modern Chinese built petrol pumps being installed now. 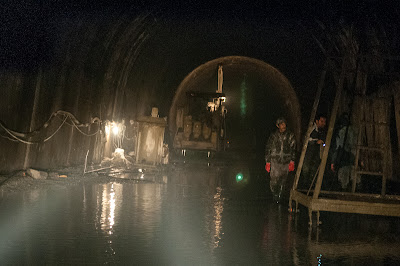 Both the tunnel and the pass were considerably easier to drive when having driven them before, when having a fully working car and during daytime. But it still took somewhere around seven hours of driving very slowly on full alert to arrive at the other side of the mountains again without any damage. 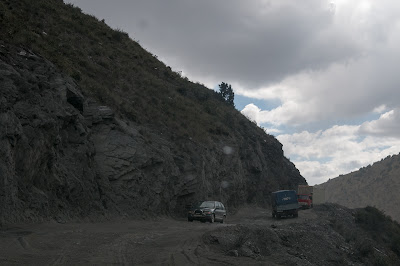 We spent the night at Hotel Leninabad in Khujand again, to drive into Kyrgyzstan the next day.
Posted by Fredrik Roubert at 04:48