After visiting Georgia, it was time for us to head for Asia proper and (as those of you who read our reasoning about The Route knew already in January) this is something we want to do by crossing the Caspian Sea on the ferryboat from Baku to Türkmenbaşy (Krasnovodsk), the truly classic way to begin any journey through Central Asia.

Nowadays Baku is in the independent nation of Azerbaijan and Krasnovodsk has been renamed to Türkmenbaşy in the independent nation of Turkmenistan, and for neither of these two nations is it possible to obtain a tourist visa while staying in Switzerland. Therefore the first step in crossing the Caspian was to obtain a Letter of Invitation from the Turkmenistan embassy in London and the second step was to apply for a visa to Azerbaijan at the embassy in Tbilisi.

The visa to Azerbaijan was to be applied for through a local travel agent. A taxi driver loitering outside the embassy recommended us a guy named Giorgi Gogorishvili at Medea Travel, just around the corner from the embassy, and this turned out to be good advice. Giorgi, who ran the agency together with his brother, was as efficient as he was friendly. The embassy then took three days to process our applications, and on Thursday afternoon Giorgi promptly called us with the good news that he had just picked up our passports at the embassy, with visas in them. So we made haste to gather our belongings and leave the Tbilisi guest house, driving the by now familiar road to the Tbilisi embassy quarters, pick up the passports and then to immediately drive on towards the Azerbaijani border. 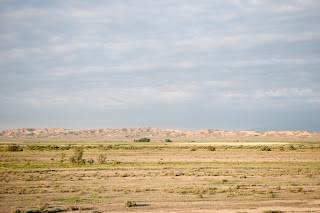 The Turkmenistan embassy in Baku does not publish any official opening hours, neither on their door nor on any website or any other place where anyone we know of has been able to find them. But we had found persistent rumors on the internet that they should be open Mondays and Fridays, possibly until noon and maybe also a couple of hours in the afternoon. So it being Thursday afternoon when we got our Azerbaijan visas, we set out for reaching Baku and the embassy before Friday noon. The drive to the border went smoothly and apart from a close encounter with a suicidal cow, traffic was low and road conditions good, and we managed to reach the border at bit after 18 o’clock. Then the waiting started. When we arrived at the border, there was already a sizable queue of vehicles in front of us, but as slow as we moved forwards the queue grew even faster behind us. We quickly learned that leaving any more than ½ metre space in front of you meant that a car with Azerbaijani plates immediately would drive around the queue and squeeze in before you, so as slow as the queue was moving, it required constant vigilance to not be left standing still. Waiting there, we encountered a number of other vehicles from the Mongol Rally and swapped stories about our travel adventures so far, and rumors about how to get through to Turkmenistan.

At around midnight, we finally reached the actual Azerbaijan border inspections. The staff was generally friendly and helpful (a man wearing the most impressive-looking Soviet style gigantic officer’s hat — we were in big-hat country now — even showed his appreciation for our ambulance with the exclamation “Nice car!”), and after little more than an hour of paperwork and inspections and some 75 USD paid in various taxes and fees, we and our ambulance were let in into Azerbaijan. Here we found ourselves on a highway of not exactly outstanding quality in the pitch dark of the barren remoteness far from any cities. Driving all the way to Baku would take at least 5 hours in daylight if traffic remained low, but quite a few more hours in this darkness. So we headed for the closest bigger populated area, Gazakh, around an hour away, to try finding some food and a couple of hours of sleep.

We found a motel just by the highway somewhere near Gazakh, where it turned out to be possible in the middle of the night to eat some chicken and lamb in broth with potatoes, drink tea and sleep for two hours before getting going again at 5 o’clock, to be on the road before sunrise to not miss even a minute of daylight driving. But with daylight also came heavier traffic, progress was slow, and it was already noon when we finally reached the outskirts of Baku, driving past the first oil rigs. So we set our hope to that rumor about the embassy also being open a couple of hours on Friday afternoon and proceeded to attempt to find the embassy at once. 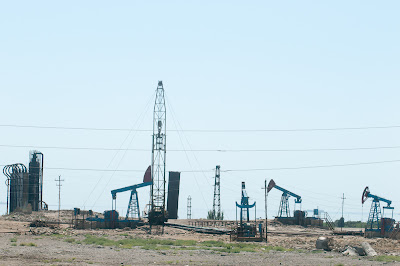 Friday noon traffic in Baku beats any city traffic I’ve ever encountered anywhere before in every possible way. There are more cars, bigger cars (enormous Toyota Land Cruiser Prada being especially popular) and smaller cars (incredible amounts of tiny Soviet era relics), more tightly packed and attempting higher speeds, than anywhere else, and all drivers seemed to be driven not primarily by any urge to get ahead themselves but more importantly to make sure that no-one else gets in front of them — even if that means that they’ll have to get stuck themselves. There also seems to be a widespread belief that honking and aggressive hand-gestures are able to invoke the magic powers required to change Newton’s laws of space and matter. Coming from the chaotic but friendly and forward-moving Tbilisi city traffic to this was a shock. The embassy had, of course, also been moved recently, a significant distance away, so by the time we finally found it, it was late afternoon and any rumors of afternoon opening hours appeared to be nothing by rumours. The embassy security guard instructed us to return “tomorrow”, and considering that several Azerbaijani institutions (including banks and some government branches) indeed work Saturdays this didn’t seem entirely improbable. (Of course “tomorrow” in the end turned out to be just a more complicating way of expressing “on Monday”.)

Now we found ourselves thoroughly exhausted, so we drove down to the waterfront and sat down in front of a brand new luxury hotel skyscraper to get some overly expensive drinks and sturgeon kebabs while calming our nerves with the stunning view of the Caspian Sea.


Most of Saturday was spent taking care of the car, getting it in shape for the upcoming journey through the deserts of Turkmenistan, and Azerbaijan being an oil country all such things as petrol and engine oil were wonderfully inexpensive. Then we met up with Anar Aliev, whom I had gotten in touch with through CouchSurfing, where he had found our itinerary and sent a message offering his help in Baku. He took us to a simple and good value-for-money guest house, near the Montin Bazaar, where we could stay for the upcoming unknown number of nights we’d need to stay until we would be able to get onboard the ferryboat across the sea. The owner of the guest house was a hospitable old man who as a boy once upon a time had learned some German at school, and still remembered one or two jokes and could invite us to eat with the words “Frühstück. Gut. Tee.”. This was indeed exactly the kind of place we needed. Anar himself had once lived for many years in Germany and spoke good German, so we went out in the area around the guest house to eat and drink and talk for the rest of the day. Then Anar had things he needed to do so with a short summary of the geography of Baku night-life, he sent us away on our own to forget bureaucracy and border-crossings for a while by learning to know the bars of downtown Baku.


Sunday was a slow day. There was absolutely nothing that we needed to do and it was late in the afternoon when we finally left the guest house at all. But when we did, it was to meet some of the local tech community. Just as in Tbilisi, Ihar had in advance introduced us to some of his friends in Baku, and we had been in touch with Amid Quliyev and Turan Rustamli who both had been awaiting our arrival. So this Sunday evening, Amid picked us up at the guest house and we drove the ambulance downtown to there be joined by their friends Shaiq, Sadiq, Ilqar, Rashad and Orxan, and their friend Khanim Javadova, journalist at BBC Azerbaijan, who from them had heard about our ambulance and our journey and now had come to do an interview. This was a most pleasurable evening; we talked, drank tea, talked more, walked around the old town and walked around the new waterfront developments, took photos and found shared experiences and passions. À propos something completely different, Turan happened to mention a calculator app for Chrome that he had written and was as pleased as surprised when I could reply that I actually knew this app and used it myself. 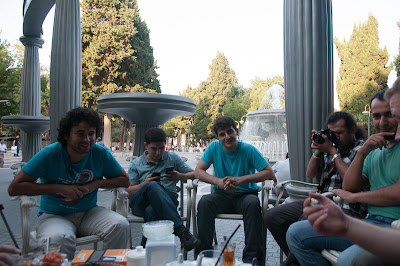 Come Monday morning and the big rush to the Turkmenistan embassy. The embassy is indeed open this day. Time to leave Baku and attempt crossing the Caspian Sea.

It grieves me a bit that there never was any time in Baku to visit the Nobel Brothers Museum at the Villa Petrolea. I had written to the museum in advance and enquired about opening hours, which sadly didn’t include weekends and both Friday and Monday ended up being far too busy for us to squeeze in any museum visits. The Nobel brothers are, as far as I know, the only people to ever beat John D. Rockefeller and his Standard Oil company in competition, by transporting oil from their oil fields in Baku through pipelines across land to the port of Batumi (which we drove through last week on our first day in Georgia), where it was loaded on ships across the Black Sea to Europe, and this efficient supply line making it possible for them to still make a profit while undercutting Standard Oil on price in Europe. When younger brother Alfred Nobel passed away and donated his fortune to found the Nobel Prize, some 12% of his wealth was in the form of stock in his brothers’ Caspian Sea oil company, Branobel.
Posted by Fredrik Roubert at 19:47