There is no way denying it: A major reason for us to go to Turkmenistan was a desire to experience this textbook totalitarian state with its all-powerful dictator, byzantine bureaucracy, ridiculous uniforms, monumental portraits, golden statues and, most of all, the zaniest of capitals, Ashgabat.

After the fall of the Soviet Union, President for Life Saparmurat Niyazov (one of few men in history who have managed to hold on to that title until their natural death), used the newly independent country’s vast natural resources to finance the realization of his many personal eccentricities, most visibly transforming the capital into something that the Lonely Planet very accurately describes as a hybrid between “Las Vegas and Pyongyang”. After visiting Ashgabat ourselves, we wholeheartedly agree with this description and have started referring to the city as Pyong Vegas. Today, power rests with Gurbanguly Berdimuhamedow, who has loosened the grip a little bit (by for example allowing himself to be re-elected with only 97% of the vote, instead of assuming the presidential title for life) but generally seems content with continuing the legacy of his predecessor, adding monumental photographic portraits of himself next to the golden statues of his predecessor, and so forth. 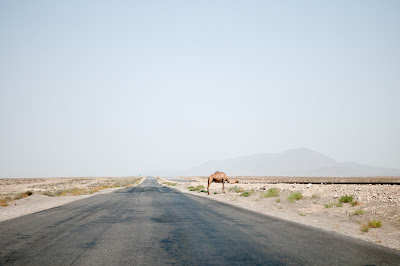 The drive from Türkmenbaşy (formerly known as Krasnovodsk, but renamed by the dictator in honour of himself) was strenuous, with only the sight of camels roaming the desert on both sides of the road adding some pleasure to the journey, and we arrived in Ashgabat long after sunset. Walking out at night into this city that is supposed to have a million inhabitants was eerie, seeing the wide well-lit streets and the pompous parks wholly devoid of people. Uniformed police and security guards were everywhere, but during an almost hour-long walk we encountered less than five normal citizens. The sights of the illuminated white marble palaces and golden statues lining the streets were spectacular, though. Seeing that there would be impossible to find anything to eat in the city, we returned to the pompous luxury hotel at which we were staying and when ordering a hamburger from room service, I could not help identifying myself with Misha Vainberg, the anti-hero in Gary Shteyngart’s novel Absurdistan. 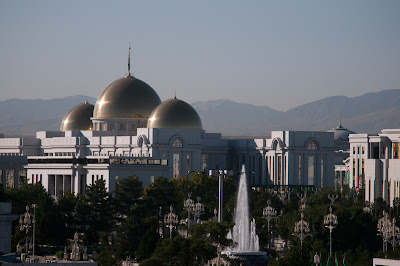 Next morning we walked out to see the insanity in broad daylight, and despite very high expectations, we were not disappointed. The park at Independence Square, around which the central government buildings are located, is quite beautiful and especially the earthquake memorial but also the Soviet war memorial are true pieces of art. Apart from the police and guards, we were the only people in the park. Judging from the behaviour of the police and guards, it seems as if the official buildings are extremely fragile, to the point that they would fall apart immediately by the click of a camera or the gravitational pull of a tourist standing still. We were allowed to walk around the park and look at the buildings across the street, but outside the Ministry of Fairness we paused for a moment upon which a uniformed guard momentarily materialized and with impossible-to-misunderstand hand gestures explained that it was essential that we moved away immediately. 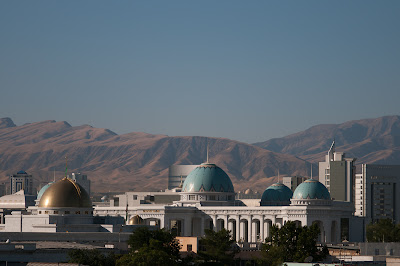 After nearly overdosing on white marble and gold (with golden flag poles topping the list of things that I had never before thought of making out of gold), and the special Turkmen yellow-brownish “gold colour” used for statues and other items not deemed important enough to be clad with real gold or even real metal, we took refuge in the Russian market bazaar where there were real normal citizens to be found.

The number of real normal citizens in the bazaar made our previous experiences in Ashgabat even eerier, for the number of real normal citizens here meant that these people actually lived here but were just not allowed to walk on the sidewalks or in the parks or anywhere at night. Two young guys grilled great döner kebab in the bazaar, and while eating we stood and chatted a bit with them. One of them, Özmir, told us that he had previously worked abroad, grilling döner kebab in Istanbul, Ankara and Antalya. After living in those cities, it must be very strange to be back home and obey the rules of life in Ashgabat.


Having so seen the city center, we picked up our trusty ambulance to try finding the Monument to Neutrality. The previous dictator, Niyazov, had ordered a 12 m tall gold-plated statue of himself to be built, and during his lifetime it was perched on top of the 75 m tall Neutrality Arch at the Independence Square in central Ashgabat. (It was then also mounted on a motorized platform that turned the statue to always face the sun.) After his death, the arch was torn down and the statue moved to the outskirts of the city, where it today is perched on top of the 95 m tall Monument to Neutrality. We had to see this before leaving Ashgabat.

Driving out of the city, it took less than half an hour to spot the statue in the distance, on top of its enormous tripod. (If anyone else wants to find it: Drive along the southern ring road around Ashgabat, and you’ll see it not very far south of that road. Once you’ve seen it from the road, it’s easy to figure out how to drive to get there.) This statue is the pièce de résistance of Dictatorship Theme Park Ashgabat. It’s gold-plated. It’s 12 m tall. It’s at the top of a 95 m tall monument. There is large Las Vegas style fountain under the monument. Inside the monument there is a viewing platform, from which one can see this artificial city (including enormous uninhabited for show apartment complexes) rise out of the middle of the desert, and a museum of Fabergé style decorative items made out of precious metals and stones to celebrate the greatness of the nation and its leader. 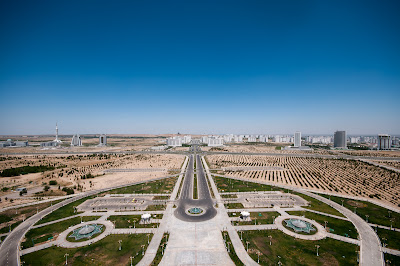 Overdose. Time to leave Pyong Vegas and try to find the real Turkmenistan.
Posted by Fredrik Roubert at 21:00