My twin brother, (yes, identical) is extremely fond of mimicking the seagulls from this Pixar classic.

I have however in the capital of Azerbaijan, Baku, met his match; let me introduce you to one of Baku’s finest: Fat Freddy. 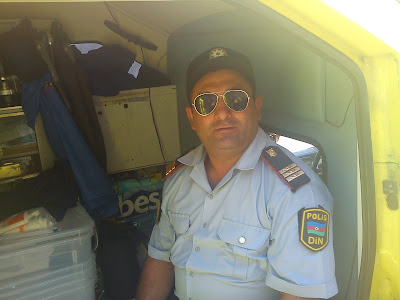 See those awesome sunglasses he is wearing, yeah... they used to belong to me.

Here is how it happened; we came to Baku Friday 27th, we then tried to find the Turkmenistan embassy, otherwise known as the “lost grail”. They had moved from their original location and relocated to a anonymous house no one had ever seen. But we went searching, and asked for help along the way, and thatch how we met Fat Freddy,,. He was absolutely delighted to see us, and said he knew exactly where it was. When he saw into the back of the ambulance,  he almost lost his mind and was transformed into the seagulls from finding Nemo! He tried to take everything from from my cellphone to the led flashlights, in the end he got away with my sunglasses and then proceeded to the front of the car, where Fredrik almost had to arm wrestle him for our SPOT-tracker, and ended up with buying him off with a packet of my cigarettes... Whopdidoo.. And he led us in the wrong direction to. Bitter..who..me..?

But except for that, everyone, INCLUDING the police have been super nice to us all the way :)
Posted by Unknown at 19:35