Uzbekistan and the Jewels of the Silk Road


There is not really very much for me to write about Uzbekistan. Any book ever written about Central Asia, from Marco Polo to the Lonely Planet, will tell you about those marvellous ancient cities along the Silk Road, such as Bukhara and Samarkand, and their treasures of history, culture and architecture. What could I possibly add to what has already been written about places such as the Kalyan minaret and mosque, the Mir-i-Arab medressa and the Ark in Bukhara or the Registan, the Shah-i-Zinda and the Gur-e-Amir in Samarkand? All I can tell you is that all you’ve ever read about how marvellous, otherworldly, majestic, awe-inspiring and beautiful these places are, all of that is true, 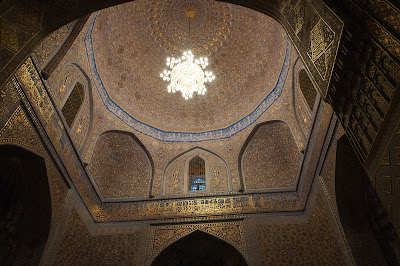 Instead I will just tell a little bit about the practicalities of travelling.

After arriving in Bukhara and attempting to navigate the narrow streets of the old neighbourhoods, our ambulance emitted a strange and unsettling noise from the rear right wheel. Driving seemed to work well enough, but this was certainly a thing that should not be left unexamined. Luckily, a detour when driving out of the old neighbourhoods lead us straight past a car mechanic’s garage. I stopped the car in front of the garage and tried to interest the people there in taking a look at the problem. But they already had customers and were not very interested in any annoying foreigners interrupting the normal flow of their day. And from a quick glance, there seemed to be nothing wrong with our car either. (We had managed to drive it all the way up to the garage, hadn’t we?) So we waited them out. If we didn’t leave, they would eventually have to take some interest in us in order to get rid of us blocking the entrance to their garage. Not a very subtle or civilized mode of communication from our side, but a very efficient one when the necessary language skills are lacking.

So eventually one of the mechanics went out to take a look and with a stroke of luck an especially nasty noise was heard just when I tried to follow his hand gestures to reverse away from blocking his garage. Then he realized that we indeed had a problem for which we needed his professional help, and suddenly took a real interest in us. He also seemed to have a good idea about what could be wrong. 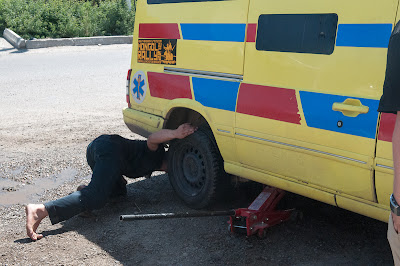 The problem turned out to be that the actual break disc for the hand brake had disintegrated and now mostly resembled a jigsaw puzzle of broken shards, which randomly reorganized themselves during movement, breaking the wheel and emitting the nasty noise. (Please use the comments section to speculate about what could have caused this.)

The ambulance has an automatic gearbox and the hand break is not essential for normal operation, so the mechanic swiftly proceeded to just remove everything that was broken and then verified that this breakage hadn’t damaged anything else. So not much later we again had a fully working car, save for lacking hand brake on the rear right wheel now.

With the ambulance fit again, we managed to successfully navigate into the old neighbourhoods to park it there and then proceed on foot.

Thomas was exhausted and parked himself at a shady café with internet access, while Rico and I walked on to find a suitable place to spend the night. Bukhara is quite the tourist destination and all of the many guest houses in the old neighbourhoods seemed to be fully occupied. When we’re finally at one of the last and hardest-to-find ones and get the answer that all beds are already taken, luck strikes again:

The lady who runs this guest house walks in through the door behind us and upon hearing the words “no beds” promptly suggests that we might sleep on the roof if we like. 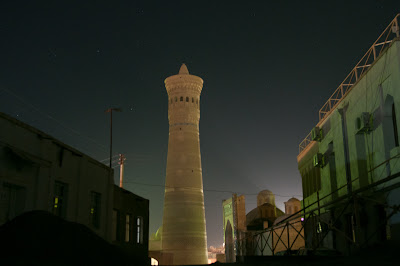 It could not have been better. In this climate, at this time of year, sleeping on the roof is the most sensible thing to do, and indeed exactly what the owner does herself. We heartily agree to this suggestion and she promises to get some good mattresses, pillows and blankets up on the roof for us. And at night, the view of the Kalyan minaret above the roofs of the old neighbourhoods of Bukhara under a clear and starry sky is indeed a sight to be tucked in by. 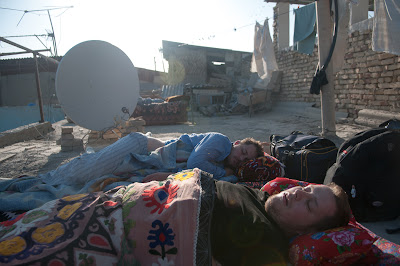 With the problem of where to stay thus solved, Rico and I go out for sightseeing while Thomas chooses to remain at the café and the internet. Rico takes a million photos, but not a single one of them will ever be able to convey the full marvel of this place, for that is impossible.

Eventually we arrive at the Ark, the old city-within-the-city complex that once was the home and workplace of the emir but now lies largely in ruins after being bombed by the Bolsheviks when they crushed the power of the last emir. But Uzbekistan is independent now and getting prosperous again, so restoration works have begun to excavate the bombed buildings and renovate the entire complex to its former glory. Unfortunately, this means that it’s all sealed off by police for any visitors.

While contemplating this dilemma, a man shows up, asks us whether we speak German, and then promptly offers to help us bribe a police officer to be let in anyway. This seems like a very good offer, we gladly accept his help, and he calls someone on his mobile phone. A short while later, one of the police officers on guard duty lets us in and behind a dark corner gets 30.000 Uzbekistani sum (with a value of around 15 USD) in cash from us and we’re free to walk around the excavation site.

The view, from atop the pile of rubble left from the bombings, is simply breathtaking and we spent a long time overlooking Bukhara at late sunset before we walked down to take a closer look at the buildings still standing. When we came down, the facilitator was there together with a German couple he had found just like he found us and he then proceeded to give us all a guided tour of those buildings in the Ark that survived the bombings. He was a good guide and spoke German well, and being totally alone at the place added to the ambiance. Being received by the emir here in the olden days must have been the experience of a lifetime.

With Bukhara giving us such a welcome to Uzbekistan, it wasn’t easy for Samarkand to impress when we arrived there the next day. Following the enthusiastic recommendations of Ivan Dervišević, we checked in at famous and popular Furkat guest house (in the old neighbourhoods just next to the Registan), a lovely and familiar place that could have been taken directly out of a movie by either Jean-Pierre Jeunet or Emir Kusturica (depending on which angle they filmed from), and had a great stay in this ancient city from fairytales and legends. 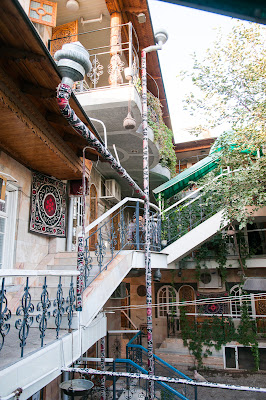 Posted by Fredrik Roubert at 14:43